New to Bitcoin? Here are 5 online
resources to get you started

Pro Crypto Clothing > Blog > Bitcoin: The Facts > New to Bitcoin? Here are 5 online
resources to get you started

New to Bitcoin? Here are 5 online
resources to get you started

You’ve heard the word Bitcoin thrown around in the past couple years. You may have heard that a bunch of nerds made some dough with it. You also think you read a headline somewhere that drug dealers and human traffickers use it for all their dastardly back-alley transactions. And now you’re fairly sure it flopped and it isn’t worth anything anymore.

Then your geeky friend – say, a guy like me or Gordon – tried to explain how awesome it is in plain English… and failed.

Nevertheless, you’re curious about this invisible currency that some people believe will change the world. So here are a few resources to get you started… in plain English.

Bitcoin.org is the original site on which Satoshi Nakamoto – Bitcoin’s anonymous creator – published the original Bitcoin system protocol. When Satoshi disappeared, it was left in the hands of a group of the core developers and members of the larger online community. It’s not an ‘official’ site as such – because Bitcoin doesn’t technically belong to any one entity – but it’s as close as you’ll get to one and you won’t find a better place to find reliable info. Start with the video on the front page, then move on to the FAQ.

2. CoinDesk’s A beginner’s guide to Bitcoin

Honestly, you could just go there and you’d be all set. CoinDesk did a great job of publishing well-written and informative articles on everything from ‘What Is Btcoin?’ to ‘How Does Cloud Mining Bitcoin Work?’. If you have no idea what cloud mining is, you will by the time you’re done with this site. Start at the top and work your way down. 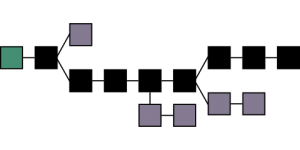 Once you’ve gotten through the basics, you might be curious to find out more about the elusive creator of the system, Satoshi Nakamoto. The site is as dry and unassuming as its namesake. It’s for the more technically oriented, as it contains papers and discussions by and with Satoshi that go pretty deep into the theory and minutiae of the system. Still, an interesting read if you’re hungry for a (itsy-bitsy-tiny) glimpse of Nakamoto the person. Be sure to check out its Crash Course in Bitcoin Political Economy.

Though you can get all the info you want on the above FAQs, sometimes you just need to ask somebody. The Bitcoin for Beginners subreddit is a great place to ask all the questions you can ever think of. Once you’ve gotten grips on the basics, subscribe to r/Bitcoin for news and insights.

This is the descendent of the original SourceForge Forum that Satoshi set up to discuss development of the Bitcoin system protocol. It’s still the largest cryptocurrency forum out there. Like the subreddit, there’s a beginner’s section for people who have questions about a technical, economical, philosophical, or any other aspect of Bitcoin. Then you can browse the rest of the forum and get to know and become a part of the largest online Bitcoin community. Another notable forum is Bitcoin Garden.

5 important facts about Satoshi Nakamoto </br> everyone should know

Leave a reply Click here to cancel the reply

5 important facts about Satoshi Nakamoto everyone should know

By Marty / No Comments